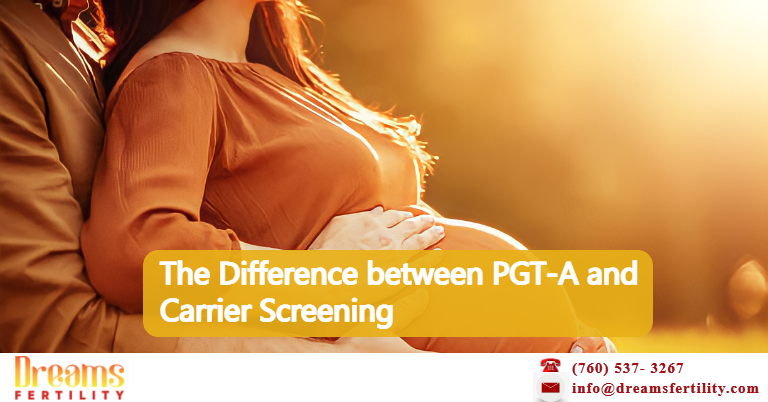 Pregnancy is a complex process involving numerous systems to ensure the birth of a healthy baby. However, there is always a risk of pregnancy-related health concerns before and after the birth of the child. They may involve the health of the mother, the infant, or both. Some women experience health issues that develop during pregnancy, while others might experience difficulty due to the health issues that exist before conception. Many of these risks are due to genetic issues and it is advisable for the intended parents to ensure that the risks are mitigated as much as possible through available genetic testing.

Genetic testing can be done on the intended parents – carrier screening – to detect if they are carriers of mutated genes that may manifest into a genetic disorder in the child. Another type of genetic testing – PGT-A – that is usually done prior to implanting embryos formed through assisted reproductive technologies (like IVF) checks for chromosomal abnormalities in the embryo to ensure that only normal, healthy embryos are implanted.

What is involved with these genetic tests and what is the difference between the two?

What is Carrier Screening?

Carrier screening is used to find out if a healthy person could be a carrier of a recessive genetic illness. If both parents are carriers of the same mutated gene, there is a 1-in-4 likelihood (25% chance) that the child will be born with both copies of mutated genes and thus be affected by the genetic disorder.

Blood, saliva, or tissue from the inside of the cheek are the samples to be tested as part of the carrier screening process. Depending on the test findings, one may either be positive or negative for the disorders screened. Typically, testing begins with the mother. No further testing is required if test results indicate that the mother is not a carrier. The male partner gets tested if test results indicate that the woman is a carrier. One does not need to be tested again for a certain disorder if they have already undergone a carrier screening test for it.

All expectant mothers and women contemplating pregnancy, are advised to undergo a carrier screening for spinal muscular atrophy, hemoglobinopathies, fragile X syndrome, and cystic fibrosis (SMA). Additional conditions may be screened for as well. Carrier screening for additional ailments can be done in two ways:

What is Targeted Carrier Screening?

Through targeted carrier screening, one is tested based on their family history or ethnicity. Carrier screening for these conditions may be advised if you are a member of a racial or ethnic group with a high carrier prevalence for a particular genetic ailment. People of African heritage, for instance, are frequently affected by sickle cell disease. French Canadians, Jewish, and Cajuns of Eastern or Central European heritage are frequently affected by Tay-Sachs disease. However, these diseases can affect anyone and are not limited only to these categories. Regardless of your race or ethnicity, screening for a certain disorder may be advised if you have a family history of it.

What is Expanded Carrier Screening?

Expanded carrier screening is screening for additional single-gene disorders outside of the traditional screening guidelines. This entails screening for genetic disorders regardless of one’s ethnic or family history. The rationale behind expanded screening is the fact that even though a carrier gene may run in the family, there would still be a chance that it has not manifested in any generation yet and so remains hidden. Also, there is always a background risk of gene mutations that could be captured during expanded carrier screening. Be sure to ask your fertility expert if this is something you should consider, based on your family health history.

What are the Benefits of Carrier Screening?

Carrier screening enables intended parents to decide on family planning in a way that is in line with their values and future plans. In case there is a risk of a child being born with genetic disorders, the couples may investigate alternative solutions, such as adoption or using a sperm or egg donor. They may also plan to go ahead with the pregnancy by being better prepared to welcome a child with special needs and also get specialized care during pregnancy and delivery.

For couples trying assisted conception, carrier screening paired with PGT, with or without testing for unrelated chromosomal disorders, is likely to be effective in making sure to transfer only normal embryos.

A single cell or a small group of cells is taken from the embryo during PGT-A. These cells’ DNA is then examined to check for any chromosomal abnormalities. Only embryos with proper chromosomes are implanted in the uterus.

PGT-A is typically advised for women over 37 years of age who are using assisted reproductive technologies to achieve pregnancy since older women are more likely to produce eggs with the incorrect number of chromosomes. It is believed that abnormal chromosomes are the primary cause of age-related infertility problems and increased risk of miscarriage or having a baby with chromosome-related disorders (like Down’s syndrome).

Besides older women, your doctor may advise PGT-A, for the following reasons:

How is PGT-A Done?

Relationship between Carrier Screening and PGT-A

To sum up, carrier screening is done on intended parents to check if they are carriers of a genetic disorder, while PGT-A is done to detect chromosomal abnormalities in the embryo prior to implantation.

Patients can undergo IVF with preimplantation genetic testing for monogenic diseases (PGT-M) to help them pick the embryo that has the highest chance of developing into a healthy child if they are discovered to be a carrier couple (both parents are carriers of the same mutation). Genetic carrier screening and PGT-A are frequently advised to be done together.

The use of PGT-A has been demonstrated to increase the likelihood of a successful pregnancy and live birth after IVF thanks to advancements in technology over the years.

Genetic problems that may either make the pregnancy complicated and risky or manifest in the child as a genetic condition are a major cause of concern for intended parents. However, advancement in genetic testing technology has made it easy to detect mutations well in advance to offer insights and knowledge to couples to plan their pregnancies and families.

At Dreams Fertility, we recommend preconception genetic testing for all people, not just infertility patients, who plan to start a family. Having this information can help parents prepare mentally and emotionally for any medical challenges their future children might face. It can also provide pediatric doctors with more information on potential complications your child may experience to help them create a more effective treatment plan that involves the earliest intervention possible.

We also believe that technological advancements in testing can help save millions of children from fatal and debilitating genetic diseases, and also save the mental stress and billions of dollars in caring for such individuals with special needs. To this end, we have partnered with HelpCureHD, a foundation that is committed to ending Huntington’s Disease. We work with the foundation to help patients obtain a PGT-IVF grant to eliminate Huntington’s Disease.

To start your fertility journey with confidence, schedule a consult with a Dreams Fertility physician today.

Dr. Luis Murrain joined Dreams Fertility in 2021, providing specialty services in Fertility and Reproductive Genetics. With a shared vision that everyone deserves to have the family of their dreams, we are dedicated to helping all of our patients. We believe that families come in all shapes and sizes, and all of them are beautiful. We are proud to have a long history of providing services to all, including gay, lesbian, and transgender individuals and couples on their road to parenthood.